In memory of the men of the 130th (St John) Field Ambulance who died while in the service of their country.

48084 Pte Isaac John Beecham from Mountain Ash, Glamorgan, Wales, was born in 1890, the eldest child of William and Melinda. Prior to the war, he worked as a coal miner and was a member of the St John Ambulance Brigade. He enlisted , along with the other members of the St John Ambulance Brigade on the 12th December 1914 at the St David’s Centre, Cardiff and initially trained with the 130th (St John) Field Ambulance but possibly due to illness, he did not sail to France with the Unit in 1915. He subsequently served in Mesopotania but was invalided home with malaria and dysentery. Once he left the convalescent home, he became an officer’s servant in Blackpool but subsequently died on the 3rd November 1918 at the age of 28 at Adelaide Hospital in Blackpool. He is burried in the Mountain Ash (Aberffrwd) cemetery, Glamorgan. 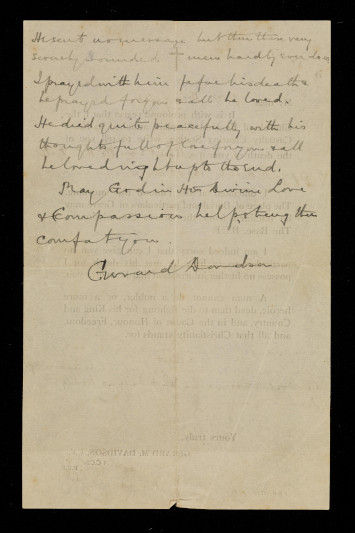 79109 Pte Herbert C Bills of Danes Hill, Gillingham, Kent was born in 1892, the eldest son of Marion Bills (nee Lee). He worked as a hospital attendant before he enlisted in November 1915. He initially served with the 144th Field Ambulance and on the hospital ship SS Aquitania before being posted to the 130th (St John) Field Ambulance in February 1917. He was wounded in the chest and right arm on the 2nd September 1917 and died the following day. His certificate of attestation on enlistment, a message to his mother (then remarried, Mrs M Huggins) regarding his death from wounds and his British War and Victory medal are held in the Welcome Library, London. He is buried in plot IV.F.15 in the Dozinghem Military Cemetery, Belgium.

69264 Pte Irvine Edmondson was a weaver from Nelson, Lancashire. He lived in Railway Street, Nelson with his wife Arabella. He was a member of the St John Ambulance Brigade and was posted to the Brigade’s hospital at Étaples in October 1915. He was among a group of men from the 130th (St John) Field Ambulance who changed places with an equal number of men from the St John Hospital in January 1918. He was gassed in March 1918 but was able to return to the unit the next month. He was wounded again in a gas attack in September 1918 and evacuated home. He died of the effects of Mustard Gas on 14th November 1918.

61343 Pte Norman Claude Hain was born in Toronto, Canada, the 3rd son of Alexander and Mary. He was killed in action on 30th April 1918 while attached from the 130th (St John) Field Ambulance to A battery of the 122nd Brigade, RFA. His eldest brother, 453607 LCpl Alexander William Hain was also killed in action while serving with the 2nd Central Onterio Regiment, Canadian Infantry, on the 8th October 1916.

56231 Pte William Houston was a cotton spinner operator from Bolton. He married in February 1911 and he and his wife Annie has two boys in 1912 and 1914. William was hit by a sniper while stretcher bearing at Mametz Wood on 7th July 1916. Despite the best efforts of his colleagues he died in the field and was buried in Caterpillar Trench. His body was never recovered and he is commemorated on the Thievpal Memorial.

Tom’s name is dear to a great many in the south and north. He was the son of Mrs C Jones, 3 Parys Lodge Square., And married to Mrs E Jones. It was in the South when the great call came, and no one was better prepared to don the soldier’s uniform. Having successfully mastered the “Ambulance” examinations related to the work, he was well acquainted and competent in the work of the RAMC, with little rehearsal, and was immediately sent out to France on his joining, and there he met his abrupt end to the sadness of the whole district. He was a faithful member of the Baptists in Salem, and much respected for his even and faultless life.

48583 Pte Thomas Jones was born in 1886 at Amlwch, Anglesey. At the age of 15, he worked as a grocer’s assistant before moving to Glamorgan, South Wales to work in the mines. He married Elizabeth Jones in 1910 and had a son Eddie. He was wounded on the 7th May 1917 while, as one of a party of men from the Unit who were traveling in a vehicle to complete a dugout at a casulty loading station east of Boesinghe (Ypres sector) when a shell struck the road on the near side of the vehicle when it was nearing Dawson’s corner (Trench map 28 N.W. 2 B22 C8.7) wounding all the men except the driver who drove on out of danger. The other men wounded were 48071 Sgt Maj W Stroud, 48124 Sgt T G Hopkins, 48103 LCpl D J Davies, 48176 LCpl G T Rees and 48157 Pte A M Llewellyn. 48583 Pte Thomas Jones died of his wounds the same day at 46 CCS Proven. He was burried the next day and the OC of the Unit, Lt Col J E H Davies attended his funeral. He is buried in plot II.C.14 in the Mendinghem Military Cemetry, Belgium.

48563 LCpl Ieuan Phillips M.M. died of his wounds on the 1st September 1918 at the age of 23. His father was a colliery foreman and he lived at the Post Office at Six Bells, Abertillery where his cousin was the post Mistress. LCpl Ieuan Phillips was mortally wounded when the Unit’s Advanced Dressing Station at Ginchy was heavily shelled on the 30th August 1918. 48559 LCpl T J Nicholas and 48130 Cpl H D Holmes were also injured. Lt Col Davies was informed of the award of the Military Medal to 48563 LCpl Ieuan Phillips on the 10th September 1918, nine days after his death. He is buried in plot V.E.33 of the Bagneux British Cemetery, Gezaaincourt.

48589 Pte Isaac Roberts was a native of Mountain Ash, Glamorgan. Son of Benjamin and Deborah and husband of Rachael. He died on 1st June 1918 from wounds sustained during the bombing of the St John Hospital in Etaples. He was among a group of men from the 130th (St John) Field Ambulance who changed places with an equal number of men from the St John Hospital in January 1918. He is buried in the Etaples Military Cemetery.

James Edward Tickner was born at Fernhurst, Sussex in 1893. James’s father Jimmy, a farm labourer and shepherd had died. James was an apprentice at a motor garage and was one of the Army Service Corps men attached to the 130th. He died on the 3rd December 1918 aged 26 and is buried in the Caudry British Cemetery (II.E.10) in France. His mother was inconsolable at his loss.

48597 Pte Frank Raymond Ward was born at Bolton in 1894. The son of Thomas and Sophia Ward he worked as a clerk in a cotton works. Frank was one of the 130th’s buglers. He was attached to “D” Battery 122nd Brigade, Royal Field Artillery at the time of his death on the 8th May 1918.

Capt Bernard Woodhouse was born in Disley, Cheshire, the second son of Lister and Mary Emily. He did his medical training at University College Hospital, London where he joined the OTC. He graduated in 1913 and joined the regular army the same year. He joined the 130th (St John) Field Ambulance and was attached to the Welsh Regiment at the time of his death.